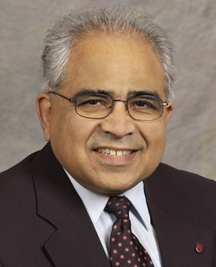 Dr. Anjan Bose, dean of the college of engineering and architecture and endowed distinguished professor in power engineering at Washington State University in Pullman, has pioneered major breakthroughs in power system control technology. His achievements include better computer controls for electric generation and transmission systems and a computer simulator used globally to avoid blackouts.

Dr. Bose developed many of the methods and software systems now used in utility power grid control centers around the world. He is especially known for a portable, real-time, computer simulator for training power grid operators, for which he developed the simulation, scenario building and other features that have dramatically improved how transmission grid operators are trained. By working with industrial psychologists to analyze grid operator job tasks, he was able to create programs that allow multiple operators with diverse functions to train simultaneously, thus replicating real-life conditions.

His research in the operation and control of the electric power grid led to breakthroughs in power system control technology now in use, including better computer control of generation and transmission systems to avoid blackouts. Dr. Bose is an expert on how to maintain power grid reliability given the changes resulting from deregulation of the U.S. power industry deregulation. He served on a blue-ribbon study team appointed by the U.S. Secretary of Energy to evaluate power outages in the Eastern and Midwestern regions of the nation. He was the first to demonstrate the object-oriented automatic display generator, which has become the standard for generating and updating substation schematics in the control center.

Dr. Bose holds a bachelor’s degree in technology from the Indian Institute of Technology at Kharagpur, a master’s degree from the University of California at Berkeley and a doctoral degree from Iowa State University in Ames, both in electrical engineering.