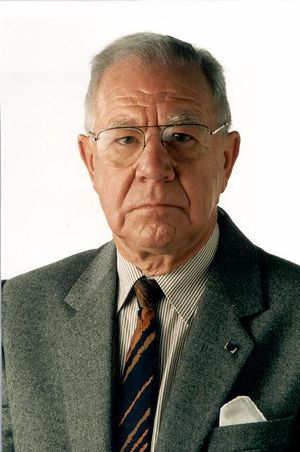 Andre J. Calvaer, professor emeritus at the University of Liege, in Belgium, is an IEEE Fellow and recipient of the IEEE Lamme Medal, awarded in 1997 "for outstanding contributions to the analysis of the dynamic performance of electric power systems, including the vital role of reactive power."

In 1947, Calvaer joined the staff of the CPTE, Brussels, a group composed of all the country's utilities that coordinates Belgium's production and transport of electrical energy. His first responsibilities were to study the problems of power availability in reserve equipment. In those precomputer days, any trick for simplifying such problems was valuable, and he provided a number of them. In 1954, as head of the largest Westinghouse network calculator in Europe, he turned to network analysis. The representation of phase shifters was then an energetic equivalent tediously applied to unbalanced or out-of-equilibrium power systems. An original solution of this problem was the germ of his Ph.D. thesis, which merged it in to an original synthesis of networks defined by asymmetrical immittance matrices with suitable positive definition properties.

Calvaer became associate professor at the University of Liege in 1961, a full professor in 1965, head of the electrical engineering department in 1968, dean of the faculty in 1972, and a member of the university's Board of Governors in 1975. Primarily in charge of studies in classical electromagnetism, circuit theory, and power system dynamics, he also maintained productive contacts with Belgian electrical energy organizations. Among the many on-the-spot problems t h a t he helped solve were those involving state estimation, torsional stresses, load flows, voltage stability, and multiple evolutions of intricate system collapses. Perhaps his most important contribution, however, was the simple modeling of the sets synchronous machine and voltage control. More than 20 years after its invention, it is still unrivaled. He earned his degree as a mining engineer in 1946 and his Ph.D. in 1957, both from the University of Liege. Calvaer is a commander of the Order of the Crown, a grand officer of the Order of King Leopold II, and an officer of the Palmes Academiques (France).