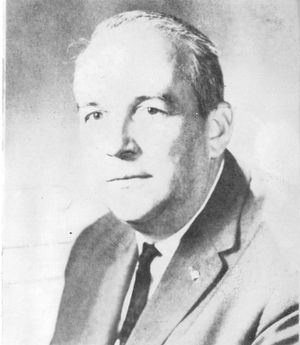 Alfred Christian Schroeder has made so many contributions to television that the importance of his individual inventions tend to be overlooked. For example, very few television engineers know that he invented the heart of today's color television system-the basic shadow mask tube-in 1946. He filed for the U.S. Patent on the tube in 1947, slightly less than ten years after he was awarded both his Bachelor's and Master's degrees in Electrical Engineering by the Massachusetts Institute of Technology.

Although he is a modest and retiring man, Mr. Schroeder has always managed to stand out from the crowd, not by talking, but by doing. He was born on February 28, 1915 in West New Brighton, New York, and after finishing high school in Westfield, N.J., he attended the University of Berlin during the 1931-32 school year. He then enrolled in M.I.T. and after receiving his degrees in 1937, immediately went to work in television research for RCA in Camden, N.J .

His first work on sync signals and sync generating systems led to the industry sync signal ultimately adopted for U.S. black-and-white television after World War II. About 1940, Mr. Schroeder became interested in color television and built the first simultaneous color camera, using three orthicons. In 1942, he moved to the newly established RCA Laboratories in Princeton, N. J ., as a Member of the Technical Staff.

He has been a prolific inventor, starting soon after he became involved in television research at RCA. He filed for patents on 11 of his 65 inventions prior to 1946.

In addition to his many inventions in the field of electronics, Mr. Schroeder has also developed a very unusual and highly plausible original theory on how the human eye sees and distinguishes different colors.

He was made a Fellow in the IEEE in 1954 in recognition of "his contributions to television receiver circuitry and his pioneering work in the development of color television."

His many contributions to color television and color picture tubes were recognized again in 1965 hy the Society of Motion Picture and Television Engineers, which awarded him the David Sarnoff Gold Medal. He has also received six RCA Laboratories Achievement Awards in recognition of his notable research. Outstanding as a scientist, Mr. Schroeder has also made his mark as a private citizen. He lives in an old Pennsylvania-style stone home in Southampton, Pa. During the summers, he sometimes conducted weekly informal discussion groups on science with high school and college students. At times, the participants include interested parents. Schroeder received the 1971 IEEE Vladimir K. Zworykin Award "For his outstanding technical contributions to television and particularly his leadership in the development of color television."

Gardening was one of his hobbies, and he has his own green house. Not surprisingly, he likes to work on double-crostic puzzles and takes about an hour to do puzzles that take others a week or so to complete. He and his wife, Janet, are nature lovers who occasionally vacation at the Audubon Nature Camp in Maine and assist in the nature work in their community. Mrs. Schroeder was quite prominent in the field of religious education and was a co-author of the book "Candles in the Dark" and author of "To Come Alive."

The Schroeders had one daughter, Carol Ann. Schroeder died in December 1978.