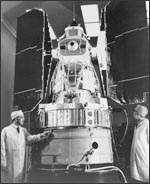 Landsat 1 in the assembly room.

On 23 July 1972, at Vandenberg Air Force Base, the Earth Resources Technology Satellite (LANDSAT-1) was launched. It provided a platform for amassing data on Earth's physical resources and conditions on a planetary scale.

In 1968, astronauts on the Apollo 8 mission took photographs of the earth from space that changed the way people viewed the planet. From high above, earth looked small, beautiful, and vulnerable, floating alone in a black sea. An already blooming environmental movement found a new reason to demand greater government involvement in controlling pollution.

One of this movement’s political supporters was Stewart Udall, a member of a prominent Arizona political family who served as secretary of the interior in the administrations of Presidents Kennedy and Johnson. Udall was shocked to see the extent of air pollution in his home state captured on images taken from space. He urged President Johnson to back a program to launch observation satellites that could track environmental conditions on earth. The Department of the Interior and NASA coordinated the development of this mission. It was initially named the Earth Resources Technology Satellite, but by the middle of the 1970s, the program was renamed LANDSAT.

LANDSAT-1 employed a new way of capturing images from space. Rather than install a television camera known as a return beam vidicon, its designers choose an innovative, fiber-optic based four-band multispectral scanner, which offered a wider range of wavebands than the return beam vidicon. Although many scientists were uneasy about installing a monitor with moving parts (in this case, an oscillating mirror) on an unmanned spacecraft, the multispectral scanner ended up being the right choice. With its multiple wavebands, it could record, in great detail and beauty, layers of change within an ecosystem.

Over the next forty years, a series of eight LANDSAT satellites would be launched to study the earth’s surface. LANDSAT changed the way Americans studied and addressed global environmental problems. For example, it gave scientists a bird’s eye view of rainforest deforestation in remote parts of Central and South America, bringing the world’s attention to a problem that might otherwise have been hidden from view. Similarly, climate scientists have used LANDSAT data to track the impact of global warming on Antarctica, obtaining data in a region too hostile to be mapped.

LANDSAT’s economic impact has also been dramatic. Its data have been used to study crop yields and monitor the exploitation of natural resources. In 2008, the three million images in the LANDSAT were released to the public for free and available to anyone with an internet connection on platforms like Google Earth.

Retrieved from "https://ethw.org/w/index.php?title=NASA_Launches_LANDSAT-1&oldid=157828"
Categories:
This page was last edited on 23 November 2017, at 06:49.
About ETHW
Policies and disclaimers