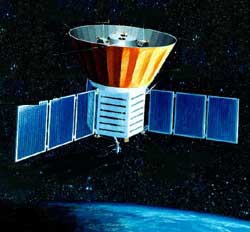 In 1948 physicist George Gamow predicted that if a big bang had occurred it would have left behind a tell tale sign—microwave radiation that would pervade the universe. Gamow calculated the intensity of this remnant radiation to be equal to the radiation from a body kept at a temperature of approximately 3 °K (–270 °C, –454 °F). This radiation has since been called the cosmic microwave background (CMB). As the universe cooled after the big bang, and its temperature dropped to around 3000 °K (2727 °C, 4940 °F), electrons and protons started to form neutral atoms and no longer had enough energy to interact with photons. At this point, radiation split from matter and was released in a flash at 3000 °K. These photons have since traveled some 15 billion years and account for the radiation bathing the universe.

The CMB was discovered and measured in 1965 by radio astronomers Arno Penzias and Robert Wilson, who had been studying the “sky temperature.” Sky temperature describes the level of noise at different radio frequencies. It is required in the planning of satellite and other wireless communication systems because it enters receiving antennas along with communication signals. The measurement system devised by Penzias and Wilson consisted of antennas designed to minimize the radiation picked up from the ground, a traveling-wave maser amplifier, and helium-cooled terminations to minimize the noise level of the measurement system.

Measurements taken by Penzias and Wilson showed the presence of a background noise level equivalent to thermal radiation at 3 °K. Since there was no apparent source for this radiation, they concluded that the radiation is a “fossil” left behind by the big bang. This information gave increased weight to the Big Bang theory. Penzias and Wilson were awarded the 1978 Nobel Prize in Physics for their discovery.

As a result of the large-scale dissimilarity in the distribution of matter in the universe, the cosmological theories require that the intensity (and hence the “temperature”) of the cosmic microwave background radiation vary with direction in the sky. That is, if you fix your location at one point in space and look towards different directions (as you do when you turn your head from side to side, for example) the universe will vary and there will be more radiation coming from some directions than from others.

In an attempt to detect this anisotropy (or direction-dependence) of temperature, NASA’s Goddard Space Flight Center developed a satellite called Cosmic Background Explorer (or COBE). This satellite carried three instruments. One was a far-infrared absolute spectrophotometer (FIRAS) to compare the cosmic microwave background radiation with a blackbody of precisely known temperature. The second instrument was a differential microwave radiometer (DMR) used to map the cosmic radiation precisely. The third instrument was a non-microwave instrument called a Diffuse Infrared Background Experiment (DIRBE).

Numerous cosmological explanations have been put forth to explain this observed anisotropy, and many conclusions drawn from the resulting models of the universe. In particular, the observations support the hypothesis that the geometry of the universe is flat, the initial perturbations in the density of mass in the universe are scale invariant, and the density is dominated by a form of matter other than ordinary matter.

Retrieved from "https://ethw.org/w/index.php?title=Cosmic_Background_Radiation&oldid=154616"
Categories:
This page was last edited on 12 April 2017, at 13:51.
About ETHW
Policies and disclaimers