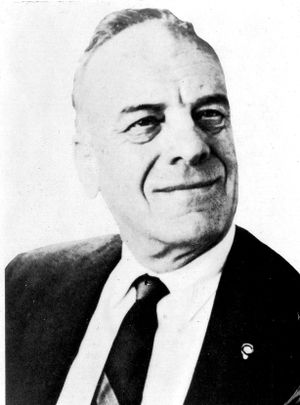 Wilfred F. Skeats was born December 14, 1901 in Newton, Massachusetts. He was graduated from Columbia College in 1923 with a Bachelor of Arts degree and two years later he received the degree of Electrical Engineer from Columbia University Engineering School. During his Sophomore year he won the Van Amringe prize in Mathematics and upon graduation was a member of Sigma Xi, Phi Beta Kappa and Tau Beta Pi honorary societies.

Following graduation he entered the Test Course of the General Electric Company at Schenectady and later completed the Advanced Course in Engineering. He then entered the high power test plant of the Switchgear Department as an engineer and later spent five years in charge of the department. In 1936 he became Assistant to the Works Engineer at the Philadelphia Works and advanced to his present position as Consulting Engineer, Engineering Research. Mr. Skeats was a registered Professional Engineer in the State of Pennsylvania.

He made substantial contributions to design as well as to factory and field tests of oil-blast circuit breakers. This resulted in reduction of the standard interrupting time of 15 KV through 138 KV circuit breakers from 30 cycles to 8 cycles. Cathode ray oscillograph measurements of both factory and field tests generally confirmed previous calculations, and yielded new features which contributed to further understanding of the phenomena.

Mr. Skeats was co-author with R. H. Park of a comprehensive paper on Circuit Breaker Voltage Recovery Rates published in 1931, which received the AIEE best paper prize award for that year in the field of theory and research. The Coffin Award of General Electric Company also was awarded for this paper. Mr. Skeats was an early proponent of synthetic short-circuit testing. His AIEE Transaction Paper in 1936 entitled "Special Tests on Impulse Circuit Breakers" was generally recognized as the beginning of synthetic testing, which is now the only method of testing EHV breakers for the full interruption rating. This has been responsible for the recent construction of a major testing facility in the General Electric High Power Laboratory in Philadelphia. Recognition of Mr. Skeats appeared in the 1964 issue of the Czechoslovak Heavy Industry magazine where there is listed the "Skeats' Method" of indirect, including synthetic, testing of high voltage breakers installed in the Sprecher and Schuh, Westinghouse, and Cerda testing laboratories.

Two additional significant accomplishments are (I) the operation of A-C generators in series for short-circuit tests and (II) the development of an artificial line with a wide range of adjustability and high insulation strength for use in the compound circuit. He has submitted three technical proposals to the United States National Committee of the International Electrotechnical Commission for discussion and subsequent adoption at the internatiOnal meetings of the IEC. All were accepted.

Mr. Skeats advocated successfully continuous conductance in the outer sheath of large metal-enclosed bus ducts such as are commonly used to carry power from large generators to their step-up transformers. This results in cancellation of most of the magnetic field strength outside the outer sheath and great reduction of the eddy-current losses. Such construction is now used in a majority of such ducts manufactured by General Electric Company.

Mr. Skeats' most notable outside activity is associated with the American Field Service program for foreign student interchange at the high school level. He and Mrs. Skeats were the original advocates of participation of the local high school and also the first local hosts . They have since been active over a span of fifteen years. Mr. and Mrs. Skeats have been hosts to students from Germany on the AFS program and from Japan and Kenya under other auspices, each for a school year or more. Mr. Skeats is a member of the Unitarian Church of Delaware County and has been a trustee of both this church and the Schenectady Unitarian Church.

Retrieved from "https://ethw.org/w/index.php?title=Wilfred_F._Skeats&oldid=171910"
Categories:
This page was last edited on 18 December 2018, at 20:45.
About ETHW
Policies and disclaimers