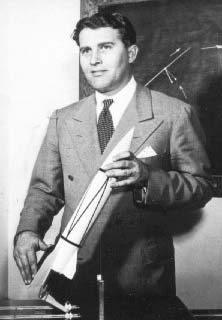 Wernher von Braun with a model of the V2 rocket

Wernher von Braun, pioneering rocket engineer and advocate of space travel, was born the second of three sons to Baron Magnus von Braun and Baroness Emmy von Quistorp, in Wirsitz, Germany, in 1912. As a child, he eagerly read the popular science fiction of Jules Verne and H.G. Wells, while also immersing himself in scientific texts and manuals on rockets. Exhibiting mechanical inclination and ability from an early age, young Wernher decided to build a car out of spare parts, a project that took up so much of his time that he flunked mathematics and physics in school. However, receiving a telescope from his mother and reading Hermann Oberth’s By Rocket to Space as an adolescent cemented his interest in and commitment to rocket science.

As a teenager, von Braun studied calculus, trigonometry, and physics, quickly mastering each despite his early academic failures. In just a few short years, von Braun achieved considerable academic success and proceeded rapidly toward his goal of becoming a pioneer in the field of space exploration: at age 16, he led several volunteers in building an observatory from scratch; at 17, he joined the German rocket society, Verein fur Raumschiffarht (VfR); at 18, he entered the Berlin Institute of Technology; two years later, he graduated with a bachelor’s degree in mechanical engineering. His activities with the rocket society received the attention of a military scientist, and after graduation, he was offered (and accepted) a position with the German army to work on a ballistic missile project developing new rocket engines. During this time he received a Ph.D in aerospace engineering from the University of Berlin—at just 22 years of age.

Von Braun soon went to work at a secret laboratory called Peenemünde near the Baltic Sea, working on the V1 missile, which would terrorize Londoners, and then heading up the team that developed the V2 missile. The basis for the rockets later used in the U.S and Soviet space programs, the V2 drew upon von Braun’s prior work with liquid-fueled rocket engines in its design. The V2 missiles, weighing about 28,000 pounds (almost 13,000 kilograms) each and produced at a slave labor factory, were capable of speeds of nearly 4,000 miles (6,400 kilometers) per hour. The V2 was tested at Peenemünde on 3 October 1942, with much success. The world’s first launch of a ballistic missile, it broke the sound barrier and became the first rocket to reach the border of space. The V2 showed promise as a combat weapon, and Hitler ordered V2 rockets into production. On 7 September 1944, the V2 was used for the first time in war hostilities. The first V2 to be fired at Britain landed at Chiswick, west London, killing a 63-year-old woman, a three-year-old girl, and a member of the Royal Engineers who was on leave. 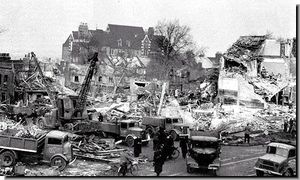 Devastation in London wrought by a V2 attack (1944)

Attacks on Britain continued, but it was not until 8 November 1944 that the Germans formally announced they were using the V2. Two days later, prime minister Winston Churchill told Parliament that Britain had been under rocket attack "for the last few weeks." Later that month, 160 people were killed and 108 seriously injured when a V2 rocket struck a Woolworth's department store in New Cross, south-east London. With Germany losing the war, the V2 was used extensively in the final months of the conflict. London was the target on more than 1,300 occasions, and missiles were also fired at Norwich and Ipswich.

By the end of the war, less than three years after their first test, V2 rockets had been fired at Britain more than 1,400 times, causing devastation wherever they landed.

The attacks on Britain and other targets, including Antwerp in Belgium, are estimated to have killed 7,250 military personnel and civilians. In addition, 12,000 forced laborers were killed producing the weapons, which were made at the German Mittelwerk factory site by prisoners from a nearby concentration camp.

By 1945, however, it was clear to von Braun that Germany was losing the war, despite the technical advancements in weaponry he helped develop, and he organized the surrender to the Americans of himself, his top 500 rocket scientists, and much of their work.

After his surrender, he worked for the U.S Army for 15 years continuing his work on ballistic missiles and rocketry. Von Braun and his team were transferred to NASA in 1960, where he became director of the Marshall Space Flight Center. There he was instrumental in the development of the Saturn V booster rocket that would eventually enable Americans to reach the moon. In 1970, he moved to Washington, D.C as Deputy Associate Administrator for Planning at NASA Headquarters, but retired two years later. He then took a position as vice-president of Fairchild Industries in Germantown, Maryland, where he was instrumental in the formation and promotion of the National Space Institute. Diagnosed with cancer in 1976, he retired from Fairchild and died on 16 June 1977 in Alexandria, Virginia.

Retrieved from "https://ethw.org/w/index.php?title=Wernher_von_Braun&oldid=178344"
Category:
This page was last edited on 19 February 2020, at 16:39.
About ETHW
Policies and disclaimers