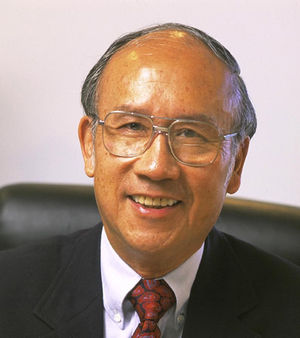 One of the most well-known individuals in optical fiber communications, Tingye Li has shaped the lightwave network infrastructure we know today. With a career spanning over 50 years, Dr. Li’s technical contributions, insight and leadership have led to innovations and advancements resulting in high-speed commercial telecommunication transmission systems. Optical fiber technology enables a huge increase in transmission capacity compared to copper-wire and radio-wave methods and provides the capacity to accommodate ever-increasing amounts of Internet traffic. Among Dr. Li’s many technical contributions was his work with Gardner Fox in the early 1960s that formulated the fundamental concepts of laser resonator modes, demonstrating that an electromagnetic wave bouncing back and forth between a pair of mirrors can resonate for a number of modes of energy distribution. This work was the first to show that an open-sided resonator containing a laser medium has unique transverse modes of resonance, which was fundamental to laser theory and practice.

Dr. Li also led several research groups at AT&T Bell Labs that demonstrated the first optical repeaters and experimented with systems showing the potential of new optical fiber technology. He was the chief proponent of adopting Erbium-doped fiber amplifiers and amplified wavelength-division multiplexing technology during the 1990s, which revolutionized high-speed long-distance communication by upgrading capacity over a hundred-fold. An IEEE Life Fellow, Dr. Li has previously received the OSA/IEEE John Tyndall Award, AT&T Science and Technology Medal and the IEEE Photonics Award. In 2009 he received the IEEE Edison Medal “For leadership, vision, and pioneering contributions in the field of broadband optical fiber communications.”

Retired from AT&T, Dr. Li is now an independent consultant who serves on the board of directors of several optical component and systems companies.

Retrieved from "https://ethw.org/w/index.php?title=Tingye_Li&oldid=172530"
Categories:
This page was last edited on 10 January 2019, at 21:36.
About ETHW
Policies and disclaimers