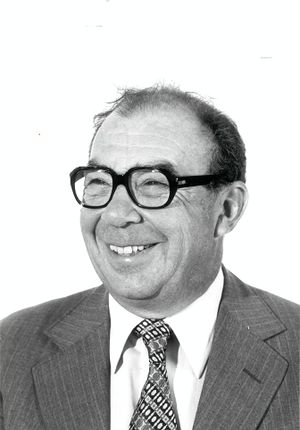 Professor Robert Mario Fano was born in Torino, Italy in 1917, where his father was Professor of Mathematics at the University of Torino. He did part of his undergraduate work at the School of Engineering in Torino, Italy, before coming to the United States in 1939 as a student of Electrical Engineering at M.I.T. He has been associated with M.I.T. since that time, receiving the S.B. in 1941 and the Sc.D. in 1947, both in Electrical Engineering.

Professor Fano has had careers in three major areas of Electrical Engineering. During the Second World War he was a staff member of the M.I.T. Radiation Laboratory working on microwave components and filters, and later co-authored Volume 9 of the famous Radiation Laboratory Series. His research led to an association with Professor Ernst Guillemin (the last M.I.T. recipient of the IEEE Education Medal) who supervised Fano's doctoral thesis on broadband matching. He then entered and helped to establish the new field of information theory, but returned to electromagnetic theory in an educational context from 1954 to 1959, during which period he and Professors L. J. Chu and R. B. Adler wrote two undergraduate texts on electromagnetism as part of a major revision of the undergraduate core curriculum in Electrical Engineering at M.I.T.

After finishing his doctoral thesis Professor Fano started research in information theory, and discovered a basic source coding result early in 1948. He met C. E. Shannon at about this time and found out about Shannon's work on information theory which was about to be published. He spent the next few years absorbing the implications of the new field, writing a set of lecture notes for the graduate course he taught and developing the field into a very active area for graduate research, as well as making many research contributions of his own. When he returned to information theory after the electromagnetic theory texts he spent a sabbatical year at the Lincoln Laboratory, developing a sequential decoding algorithm which was influential in the application of information theory in practical communications systems. He then thoroughly revised his notes, doing a great deal of basic research in the process, and they were published as a text in 1961.

In 1963 Professor Fano started his third career, organizing and becoming director of M.I.T.'s Project MAC in 1963. Project MAC (now the Laboratory for Computer Science) became the center of computer science research and graduate education at M.I.T., and the people he gathered there started a computer science undergraduate curriculum which became an independent educational program in 1969. Professor Fano became Associate Head of the Electrical Engineering Department in 1971 with primary responsibility for the computer science area and oversaw the continuing curriculum development until 1974.

In 1974-1975 Professor Fano spent a Sabbatical at the IBM Research Laboratory in Zurich, Switzerland, and developed a theory of impulse noise in telephone networks. He was busy teaching, as usual - this time lecturing to three hundred students about programming languages and their interpreters.