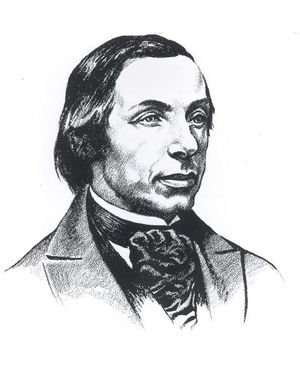 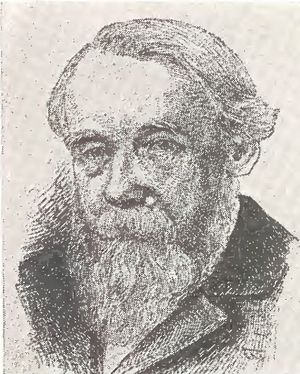 Professor Farmer was born 9 February 1820, at Boscawen, N. H. He studied at Dartmouth College from 1840 to 1843. After having charge of a private school, he gave up this work in 1847 to devote his entire time to scientific pursuits. In this year, he invented an electromagnetic engine, and in an exhibition at Dover, N. H., on 26 July 1847, transported passengers on a miniature electric railroad. After lecturing on this invention a number of times, he opened a telegraph office at South Framingham, Mass., and there devised an electrical fire alarm system. This was shown by him in Boston in 1849, and afterward perfected in conjunction with Dr. W. F. Channing. The system was first placed in operation in 1852. Professor Farmer subsequently devised many machines and much equipment of importance in the very early days of the electrical industry. In 1852, he devised a system of two or more closed circuit repeaters, and in 1853 patented apparatus for simultaneous transmission of four messages on one wire. He then became interested in dial telegraphy, duplex and multiple transmission, and the manufacture of rubber insulation. Becoming interested in electric lighting, in 1859 he invented an automatic regulator for controlling current to electric lamps, and illuminated his own house by electricity that year. Among his many other activities, he is reported to have been the first to construct a self-excited magnetoelectric machine. Professor Farmer was connected with many scientific associations of the day. He died at Chicago, Illinois on 25 May 1893, where he had gone to prepare an exhibition of his early inventions for the World's Columbian Exposition.

THE THIRD individual to be awarded honorary membership in the Institute was Prof. Moses Gerrish Farmer, a charter member, who was elected on October 21, 1890.

Retrieved from "https://ethw.org/w/index.php?title=Moses_G._Farmer&oldid=156422"
Categories:
This page was last edited on 11 September 2017, at 16:23.
About ETHW
Policies and disclaimers