Alan Dower Blumlein filed a patent for a two-channel audio system called “stereo” on 14 December 1931. It included a "shuffling" circuit to preserve directional sound, an orthogonal “Blumlein Pair” of velocity microphones, the recording of two orthogonal channels in a single groove, stereo disc-cutting head, and hybrid transformer to mix directional signals. Blumlein brought his equipment to Abbey Road Studios in 1934 and recorded the London Philharmonic Orchestra. 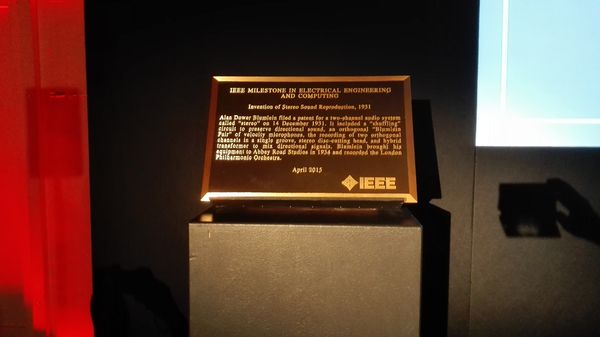 Studios are working studios having been established in 1931. Abbey Road was the site of where on January 19th 1934, Alan Blumlein used his Stereo recording equipment to record Sir Thomas Beecham conducting the London Philharmonic Orchestra playing Mozart's Jupiter Symphony.

The plaque will be firmly secured to the outside of the building. Visitors can view the plaque from Abbey Road and will not need access to the studios.

The historical significance of this work is that Alan Blumlein developed a single track, 2 channel recording system. Although he used the available methods of Hill and Dale & Lateral Cutting to achieve groves at 90 degrees to each other, he specified that 45/ 45 cutting system would have significant advantages. Within his patent, he went into great detail about the technology involved with the problems associated with sound reproduction and interpretation by the human brain.

Future development in the use of sound recording and reproduction for film was also covered in the patent.

(1) Patent number 394,325 - Improvements in and relating to Sound-transmission, Sound recording and Sound-reproducing Systems