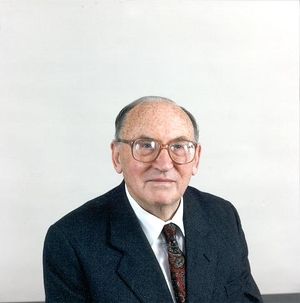 Maurice V. Wilkes was born in Worcestershire, England in 1913. He received the B.A. and Ph.D. degrees in 1934 and 1937, respectively, from Cambridge University.

As a graduate student in the Cavendish Laboratory he did experimental research on the propagation of radio waves in the ionosphere. This led to an interest in tidal motion in the atmosphere and his first book was on this subject. It also led to an interest in computing methods. After war service in 1945 he returned to Cambridge and became head of its Computer Laboratory, then called the Mathematical Laboratory.

In the summer of 1946, Dr. Wilkes attended the famous Moore School lectures on electronic computers in Philadelphia. On his return to England, he led a small team, which developed the EDSAC. When it became operational in 1949, it was the world's first practical electronic stored program digital computer. In 1951, he published with two colleagues Preparation of Programs for an Electronic Digital Computer, one of the earliest books to appear on computer programming. At this time, he put forward his proposals for microprogramming a system, which later became adopted widely in the industry. In 1965, he published a paper on cache memories, followed by a book on time-sharing.

In 1974, Maurice Wilkes determined that the time had come when networks of much wider bandwidth based on computer technology might replace local area networks based on traditional telecommunication technology. The design study for what became known as the Cambridge Ring was published in 1975. The Cambridge Model Distributed System, a pioneering client-server system, was based on this ring.

Since 1980 Dr. Wilkes has worked in industry, first with Digital Equipment Corporation in Massachusetts and with the Olivetti and Oracle Research Laboratory in Cambridge, England, where he is staff advisor on research strategy. He is a Distinguished Fellow of the British Computer Society, a Fellow of the Royal Society, and a Fellow of the Royal Academy of Engineering. He is a Foreign Associate of both the U.S. National Academy ofSciences and the U.S. National Academy of Engineering. He is also a Foreign Honorary Member of the American Academy of Arts and Sciences. He was the recipient of the 1992 Kyoto Prize for Advanced 'Technology.

Retrieved from "https://ethw.org/w/index.php?title=Maurice_V._Wilkes&oldid=173170"
Categories:
This page was last edited on 29 January 2019, at 20:29.
About ETHW
Policies and disclaimers