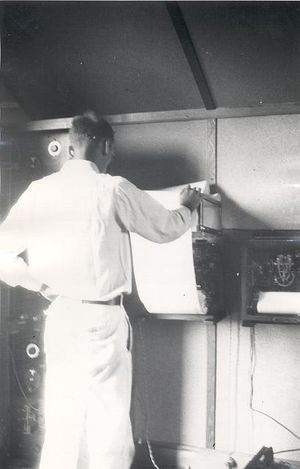 Karl Jansky was born on October 22, 1905, and he is most famous for discovering radio waves emanating from the Milky Way in 1931, using a radio telescope, a foundational event in the field of Radio Astronomy. He attended the University of Wisconsin and received a BS in physics in 1927, and began working at Bell Telephone Laboratories in Holmdel, New Jersey in 1928.

In the early 1930s at Bell Telephone Laboratories, Karl Guthe Jansky was investigating the noise in the radiotelephone transmissions across the Atlantic Ocean. He distinguished three types of static: crashes from local thunderstorms, a steadier and weaker static from the combined effect of distant storms, and a weak hiss of unknown origin.

In an article in 1933 Proceedings of the IRE, he first reported these results, suggesting that the weak hiss might be associated with the sun. He investigated the noise further with a highly directional antenna at the 14.6m wavelength. He found that the antenna noise attained at maximum was time shifted by 4 minutes per day - the difference between stellar time and solar time. He identified the position of maximum intensity with a position at the center of our Galaxy. He had discovered what we now know to be the diffuse galactic synchroton emission. Jansky didn't pursue further development of radio astronomy after publishing his findings, though Grote Reber continued his work for many years after.

Jansky died on February 14th, 1950, at 44 years old due to kidney failure in Red Bank, New Jersey. In honor of Jansky’s discovery, the unit of radio-wave emission strength was named the jansky. There is also a crater on the moon named Jansky after him.

Retrieved from "https://ethw.org/w/index.php?title=Karl_Jansky&oldid=177969"
Category:
This page was last edited on 4 December 2019, at 18:07.
About ETHW
Policies and disclaimers