The Yi dynasty (1392-1910) established the Telegram Bureau and began the first telegram service in Korea, between Seoul and Inchon in 1885. In the same year the telegram system linking Seoul and Eujoo (a city in the northwest part of Korea, adjacent to China) was built with the technical assistance of the United States. Two years later, the telegram service was extended from Seoul to Busan (a port city in the southeast part of Korea) with the technical assistance of a British engineer Mr. Halifax. In 1902 the intracity telephone service began in Seoul and the intercity telephone service began in Seoul and the intercity telephone service between Seoul and Inchon followed it. The production of automatic telephone exchange system began in 1959. And modern electronic switching system is being introduced nationwide since 1979. The advent of electricity in Korea was in 1887, when two arc light bulbs shone the palace of Yi dynasty. It was 8 years after the first invetion of light bulb by Thomas Edison. The Yi dynasty sent a special envoy to the U.S.A. and made a contact with the Edison Electric Corporation. The Edison Electric Company installed two 3 KW steam power generators in the palace. To meet the increasing demend for electricity, the first hydraulic power station at Bujon dam was built in 1929 (during the Japanese occupation). The division of the South and North Korea after the World War II, and the Korean War brought extreme shortage of electric power in the South. The electrification of the whole area of the nation is made possible in 1970's. The ever increasing demand for electricity and the oil shock accelerated the construction of he first nuclear power plant at Kori in 1976. More nuclear power plants are scheduled for construction.

The first test signal for radio broadcasting was aired in 1924 (during the Japanese occupation), and next year the commercial broadcasting began. As for the television, RCA Corporation demonstrated the CCTV in Seoul for the first time in 1954. Two years later, the first commercial TV broadcating station using NTSC system aired its program. The production of radio receiver by the Korean industry began in 1959 and that of TV receiver (black and white) in 1966. The color television broadcasting had been delayed until 1980, while the color TV receivers had been produced for export prior to that. Now 90% of the households in Korea possess a TV receiver. The railroad transportation service began with the telegraph service in 1885, linking Seoul and a port city, Inchon. The facilities for a street-car was built in 1889 by requesting the technical assistance of Japan, and next year they were open to the public service. To ease the severe traffic congestion, The first subway system across the metropolitan area of Seoul was built in 1975. Three subway lines are under construction. 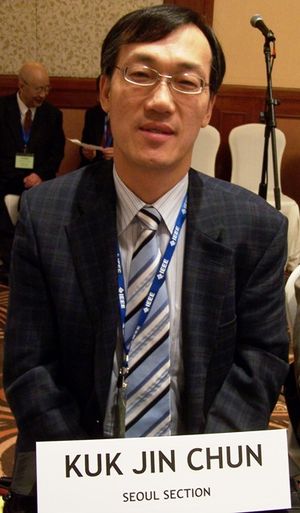 Retrieved from "https://ethw.org/w/index.php?title=IEEE_Seoul_Section_History&oldid=179127"
Categories:
This page was last edited on 8 April 2020, at 14:25.
About ETHW
Policies and disclaimers