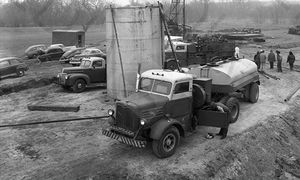 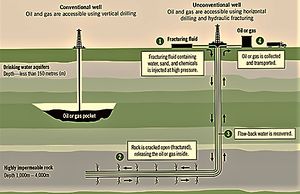 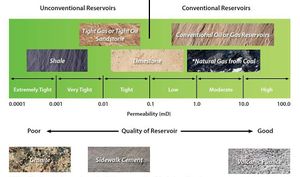 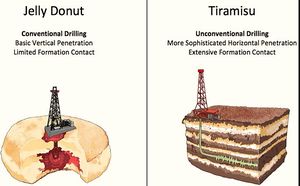 The conventional - unconventional drilling differences explained through a comparison with pastries and cakes. 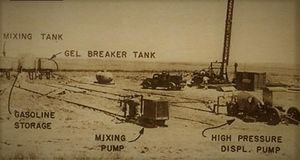 A set of machinery displaced in field and used in early vertical hydraulic fracturing operations, 1947. 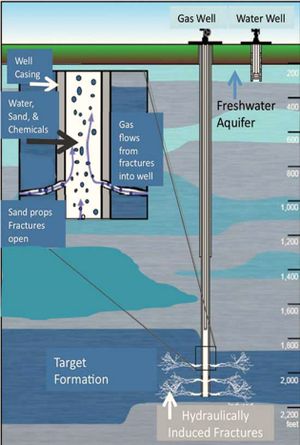 Dynamic of the production in hydraulic fractured wells. 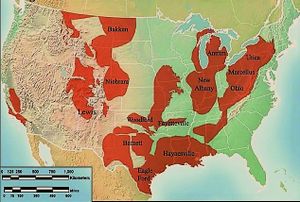 Map of shale rock resources sensed in the United States in 2014.

The expression Hydraulic Fracturing (often called just fracking or fracing by the industry operators) refers to a complex steering drilling (directional[1] or horizontal[2]) and high-pressure fluid injection technology used to uncap mostly gas (tight gas, shale gas and coalbed gas / coalbed methane[3]) and to lesser extent, petroleum (tight oil[4] and shale oil[5]) trapped in the shale rocks[6] and tight sandstones. Geology defines those rocks as tight formations because the low rate of porosity they present when compared to the sedimentary formations[7] where conventional/traditional oil reservoirs are generally found. The rock fracturing is first provoked by explosion, but the enlargement and completion of the fracturing is done by mean of fluids - hence, the name of hydraulic fracturing.

The unconventional sector was a major advancement in petroleum science and technology, as it expressed an innovative paradigm of production. Hydraulic Fracturing is the technology that better defines and incorporates the meaning of the so-called Unconventional Petroleum Industry. It lays its foundations on directional hydraulic fracturing, the technology based on alternatives geological and drilling patterns - therefore considered a not-conventional methodology. The expression started to be used in the 1990s in the United States to frame its technological boundaries and distinguish it from the traditional set of exploration and production practices (vertical drilling to struck oil reservoirs in high porosity formations) developed in the 19th century in the United States, Canada, and Russia, and then used all over the world. Conventional (traditional technology) and Unconventional (alternative technology fast-pace growing) petroleum finding are the two faces of the 21th century petroleum industry. The conventional petroleum practice is still the dominant way in the world and it provides almost all the petroleum sold in the global markets.

Remarkable steps have been achieved in past 30 years in the unconventional methods, and Pennsylvania, Oklahoma and Texas have been pivotal training fields. However, hydraulic fracturing remains still a relatively young technology in continuous improvement that demands high capital investments; very prepared workforce; and, specific tools and instruments. It is a very sensitive technology that cannot be used everywhere in the world unless it is constantly adapted to the composition and texture of the local shale rocks. Small to medium size operations are pretty profitable and some American oil companies are transferring the technology to develop large operations in other countries, such as the Neuquén province in Argentina.

Historical development: from vertical to horizontal

Some scholars refer to the shooting well practice (torpedoes) as the precursor of the today hydraulic fracturing technology, but the two technologies differ in their underlying principle. The first was an early pioneering enhanced oil recovery[8] technology (aka, tertiary recovery) aimed to maximize the production of vertical wells drilled into conventional petroleum reservoirs.[9] The well shooting technique used only explosives; no fluids, high pressures, nor blends of sands and chemicals were injected into the wells. It was practised mainly in Pennsylvania until the 1970s.

The use of fluids as fracturing agent was the idea first conceived by Riley Floyd Farris (1911-2003), petroleum engineer and researcher at Stanolind, the exploration and production subsidiary of Indiana Standard (Amoco Production Co.). In 1946-1947, Farris and his colleague Robert Fast successfully tested the hydrafrac theory in southwestern Kansas. They later added napalm-thickened gasoline to the water and a gel breaker to stimulate the flow of natural gas from the limestones. On March 1949, Halliburton and Stanolind completed the first successful, commercial, hydraulically fractured wells in Oklahoma and Texas. During some tests in East Texas, they attempted to mix in river sand to keep fractures propped open. It worked, and the use of proppant became an established procedure. On December 1949, Farris filed a patent for a process for “increasing the productivity of an oil or gas well”,[10] and the patent was issued in 1952. Water was introduced as a fracturing fluid in 1953, and the data shows an increase in the number of records of both hydraulic fracturing with fluid agents and water-based treatments at that time. In the same year, the number of records of proppant use also increased, mostly sands. In February 1965, experiments were initiated in the laboratory setting to investigate the feasibility of creating a controlled system of horizontal fractures by means of explosives and fluids. In 1969, the fracturing of oil shale by mean of electricity was tested. By 1970s, the introduction of metal-based crosslinking agents further enhanced the viscosity of fracking fluids and enabled the fracturing of higher temperature wells. However, the action of fracturing a rock is just one element of the Unconventional Technology, which is equally important like the seismology (in the 1980s pivotal steps were made) and the steering (directional/horizontal) drilling. In merging hydraulic fracturing with the latter, the industry opened new avenues to the commercial production of oil and gas. In the 1970s, were conceived and patented horizontal drilling technologies[11] specifically conceived to frack, and this was a crucial step for the future development of the unconventional.

If necessity is the mother of invention, the 1970’s dilemma of the energy balance moved individuals, groups of scientists and technologists, and a generation of government funded researchers to create new, unconventional, patterns in hydrocarbon production. The United States congress created the Energy Research and Development Administration in October 1974, in response to the nation's growing need for additional sources of energy and to expand energy research and development efforts. In 1975, it started the National Energy Research, Development and Demonstration Plans, which outlined the changes in the nature and scope of the nation’s energy, including in the priorities list to accelerate the capability to extract gaseous and liquid fuels from coal and shale. The Federal Government would have provided overall leadership and great research support and undertook those efforts that the private industry could not initiate due to the lack of means and know-how. Later, when the technology approached the stage of commercialization, industry would have assumed risks and merits of the initiative. Continuing in 1976, the fear of natural gas shortages together with the growth of the oil prices motivated Congress to authorize the Unconventional Gas Research agency to study technologies for recovering gas from shale. This agency worked closely with the R&D, industry-sponsored, organization Gas Research Institute, also founded in 1976. These agencies improved and pioneered numerous technologies, including directionally drilled wells, downhole video cameras, nitrogen foam fracturing, and electromagnetic measurement-while-drilling-sensors. After President Carter’s Department of Energy Organization Act of 1977,[12] the existing policy was consolidated and more emphasis was put on the exploitation of shale formations. Federal research and development agencies lent crucial backing for the drilling innovation that commercialized the horizontal fracturing; during the 1970s, the term massivefrac[13] (massive hydraulic fracturing) was coined to describe hydraulic fracturing operations of deeper, high-temperature formations that used water, fluids, sands, and a more diverse mix of additives. The massavefrac term today is an obsolete expression, no longer in use. In the 80s temperature-sensitive gelling agents emerged, such as hydroxyethylcellulose[14] (HEC) were introduced.

The other important element that explains the rising of the new unconventional system together with the technology in the United States is the wide availability of shale formations. Different than the conventional petroleum reservoirs, shale reservoirs are easy to map. They are several hundred feet thick but horizontally extended across thousands of square kilometers. Petroleum professionals in past decades attempted to produce hydrocarbons from shale, but lacked the technical means to break into the extremely fine-grained source rock. This technical impediment was the main reason why hydraulic fracturing practice did not find major application (other than tertiary recovery use) until it was combined with steering drilling. While the fracturing of vertical wells allows the recovery of gas from one or two hundred of feet of shale, the steering of the well and drilling along the horizontal line of the formation allows the exploitation of miles of shale rock and an exponential increase of production. Steering drilling derives from the early models of rotary drilling.[15] The first patent for adjusting and steering the direction of the drill bits dates back to 1891. This artifact was slowly introduced in the oil fields but received little attention. In the 1920s several lawsuits were filed alleging that wells drilled from a rig on one property had crossed the boundary and reached the reservoir on the adjacent land. In the following decades, drillers attempted to drill non-straight line, short-radius, wells but with limited success. The main problem was the inability to see where they were steering the bit. It was necessary to frequently stop the drilling and conduct time-consuming surveys before moving on. A major advancement in the 1970s was the introduction of downhole drilling motors[16] powered by the hydraulics of the drilling mud circulated down the drill string. A piece of bent pipe between the stationary drill pipe and the downhole motor allowed the direction of the wellbore to be changed without needing to pull all the drill pipes out. Thus when coupled with the development of instruments capable to receive and interpret a streaming of downhole data, directional drilling became more practical.

The key character who more than others epitomize the shift theory & experimentation-to-practice in the field was the Houston oil entrepreneur George Phydias Mitchell (1919-2013) founder of the Mitchell Energy Company. He first attempted the vertical hydraulic fracturing in into shale rocks in 1982 for producing gas (encouraged by the federal price incentives and subsides to produce unconventional gas sources) in the Barnet Shale (TX); eventually, he applied systematically the directional drilling and gave the spark to the industrial exploitation of the unconventional plays. With him, today's unconventional oil age found momentum and the combination of hydraulic fracturing technologies, directional-horizontal Drilling, 3D seismic, and proppants proved to be commercially viable.

Since the 1990s, the process to fracture a well is for the most composed of three basic steps:

Retrieved from "https://ethw.org/w/index.php?title=Hydraulic_Fracturing&oldid=186215"
Categories:
This page was last edited on 17 September 2021, at 18:16.
About ETHW
Policies and disclaimers