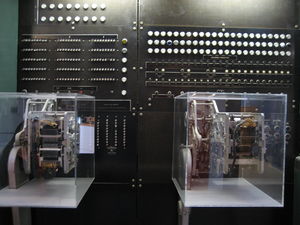 Partial View of Harvard's Mark I 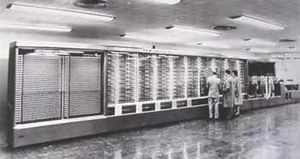 The Mark I computer, built at Harvard University in 1944, is one of the early landmarks of computer technology. The computer was the brainchild of Howard Aiken, a Harvard graduate student (PhD, 1939) and then instructor, and was based on mechanical, punch-card tabulating equipment developed by the International Business Machines Corporation (IBM).

Punched-card equipment had been available for many years and was used by large organizations to store and retrieve information in the form of perforated paper cards called punched cards. Aiken proposed to modify this equipment so that it could perform arithmetic operations, including complex trigonometry and logarithms. He wrote a report outlining his plans and was invited to oversee the construction of the machine at an IBM facility in Endicott, New York.

The original computer weighed about five tons. In operation, it was fed instructions that were coded in the form of holes punched in a narrow paper tape or a punched paper card. The machine spat out the answers to the mathematical problems on either a punched card or a teletypewriter. Originally called the Automatic Sequence Controlled Calculator when it was finished in 1944, it was renamed the Harvard Mark I when it was moved to Harvard. It was an electromechanical device.


Joined at Harvard by mathematician Grace Hopper, Aiken used the Mark I to assist the U.S. Navy in calculating tables to aid in the aiming of artillery shells and bombs until the end of World War II in early 1945. The machine remained in use until 1959, although by that time its performance was far surpassed by the new electronic computers.

Retrieved from "https://ethw.org/w/index.php?title=Harvard_Mark_I&oldid=120068"
Categories:
This page was last edited on 15 September 2015, at 17:36.
About ETHW
Policies and disclaimers