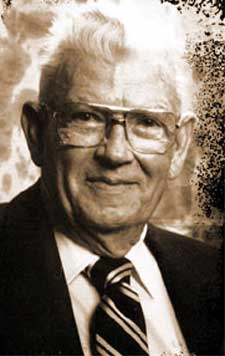 Harold Burroughs Rhodes’ virtually life-long interest in music began early when he was introduced to jazz through his brother’s record collection.

Although Rhodes studied architectural engineering at the University of Southern California (with a music minor), the Great Depression and the break up of his parents’ marriage soon forced Rhodes to drop out of school in order to support his family. At the age of nineteen he became a piano teacher after inheriting his music teacher’s students.

Not long after, another major historical event—World War II—altered Rhodes’ career path. Called into duty, Rhodes joined the military and attended Army Air Forces flight instructor training. There he used his piano teaching skills to teach his friends. A doctor at the base learned of Rhodes’ talents and recruited him to teach wounded soldiers with his fun methods. It was during this time that Rhodes’ innovations in the production of musical instruments began. He designed a piano small enough to fit on the lap of someone lying in bed. Rhodes directed music recreation therapy for these soldiers using the piano he invented, known as the “Xylette.” His teaching efforts led to his being awarded a Commemoration of Exceptional Civilian Service, the highest honor given to civilians by the War Department. Teaching others was the achievement that Rhodes remained most proud of throughout his life.

In the 1950s Rhodes partnered with Leo Fender to form the Fender/Rhodes Company, which marketed the Rhodes-Fender piano. Artists such as Herbie Hancock, Ray Manzarek of the Doors, Paul McCartney, and Stevie Wonder all used Rhodes’ pianos in their compositions. CBS bought Rhodes’ company in 1965 and Rhodes continued to work for the corporation as a consultant until 1984, when the company was sold. Eventually it became the property of the Japanese keyboard company Roland, which manufactured keyboards that retained Rhodes’ name but included a digital version of the Rhodes piano sound, much to his disapproval.

Rhodes married three times, marrying his last wife, Margit, in 1991. The couple had been engaged earlier in life, but the two failed to get married when Rhodes did not receive a reply from Margit’s father after requesting her hand in marriage. Rhodes eventually married another woman. Years later, after hearing a Rhodes piano, Margit, then widowed, decided to give Rhodes (also widowed) a call, leading to the rekindling of their past love for each other and a more successful courtship.

Retrieved from "https://ethw.org/w/index.php?title=Harold_B._Rhodes&oldid=145961"
Categories:
This page was last edited on 27 January 2016, at 16:36.
About ETHW
Policies and disclaimers