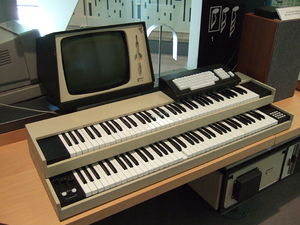 The “granddaddy” of today’s digital musical instruments is arguably the Fairlight CMI, a computer-controlled music synthesizer first introduced in 1979. The Fairlight was the result of three converging but separate historical trends—the miniaturization of computers, the evolution of synthesizers, and the emergence of the arts of digital recording and digital signal processing.

By about the middle of the 1970s, relatively small and inexpensive computers were becoming available, in part because of the introduction of the microprocessor and integrated circuit memory chips. The field of digital recording had also emerged, making it possible to use a computer (or computer-like device) to capture sounds, “digitize” them (converting them into digital data), and to store the recordings in computer memory or on tape. Innovators in the field of signal processing had shown how a single digitized sound could be modified by the computer to change its speed, pitch, or timbre (the basic character of the sound). Analog synthesizers available at that time generated their tones directly from electronic circuits, but engineers thought they could generate a wider range of tones using digital recordings, manipulated by a computer. Further, they realized that the computer would also allow them to create entirely new sounds, which could also be shaped and twisted at will.

The first commercially-available realization of that plan was the Fairlight CMI. It was capable of making a short recording of any sound—a voice, instrument, or random noise—and converting it to digital data. Then that stored data could be matched to the notes of the keyboard, to “flavor” them, in a sense. If the original sound had been a single note played on a flute, the Fairlight would use that information to allow every note on the keyboard to sound like that flute. Sort of. The process was far from perfect, but it was better than any previous type of synthesizer.

The Fairlight company was established by two engineers in Australia, Peter Vogel and Kim Ryrie. Although the first Fairlight, the Series 1, was available in the late 1970s, it was not well known among musicians until artists such as Kate Bush and Peter Gabriel featured the improved Series 2 instrument prominently in songs such as Gabriel’s “Shock the Monkey.” Inside the Fairlight was a modified version of a small business computer called the Qasar. It sported two Motorola 6800 microprocessors (of the same type found in early Apple computers), and a specialized computer operating software developed for early PCs by programmer Tim Paterson. The complete package included two keyboards, each with 48 keys, a computer keyboard, and a monitor. A visual representation of the stored waveform could be manually edited using either the computer keyboard, or directly on the monitor with a light pen.

When the Fairlight was introduced, it was virtually the only digital sampling synthesizer on the market. Its price tag of up to $40,000 made it so expensive that only the largest and best-funded studios or mega-stars could afford it. With the introduction of less expensive digital synthesizers beginning in the mid-1980s, the appeal of the Fairlight began to wane. However, musicians today sometimes seek out an old Fairlight to get access to the programmed samples that were supplied by the factory with new instruments—now they’re “retro.”

Retrieved from "https://ethw.org/w/index.php?title=Fairlight_CMI&oldid=154663"
Categories:
This page was last edited on 12 April 2017, at 13:51.
About ETHW
Policies and disclaimers