Electricity and the Housewife 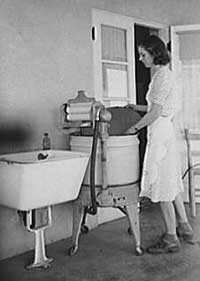 Electric washing machines, like this one from the 1930s, greatly eased the burden of washing clothes. Courtesy: Library of Congress.

In the late 1800s, when many electric technologies were being introduced to the public, opportunities to work as inventors or electrical engineers were largely closed to women. Up until the 1950s (and even after that, to some extent), most women did not have access to the types of education or experience that would have allowed them to work alongside men in laboratories such as Thomas Edison’s “Invention Factory.” One of the ways women did contribute, however, was in the design of the first electrical technologies. Corporations, advertising agencies, and women's magazines also hired women to conduct market research and to promote new household technologies.  Because of women's assumed expertise on domestic labor, the advertising industry provided unique employment opportunities for women.  Other women worked as home economics specialists in corporations; government agencies; and educational institutions, including colleges and universities.

Women's roles as consumers and home economics professionals greatly shaped the development of household technologies in the United States. In their roles as housewives, middle-class women ran households.  Cultural norms and the early twentieth century home economics movement prescribed the middle-class homemaker role as requiring not only labor but also scientific management skills. Women were generally given responsibility over decisions about what products and appliances to buy for the home and how things in the home would be used. This decision-making power meant that women as a group had a say in which electrical products succeeded and which failed. Many household appliances, for example, fell by the wayside, not because they didn’t work, but because housewives didn’t find them useful. By using their power as consumers, women played an indirect, but extremely important, role in shaping the history of electrical technology.

Electricity first spread to the urban homes of the wealthy and the middle class.  Many wealthy women were highly educated and felt strongly that running a household should be like managing a small business. Just as real businesses were employing new technologies and managerial science to improve efficiency, many home economists and housewives at the time believed that the use of technology in the home would improve the efficiency of household tasks. Encouraged by women's magazines, housewives strived to become "household engineers." For most people in the U.S. and Europe, however, those changes did not occur until the period between about 1930 and 1950, when governments took action to promote the provision of electricity to homes.

The introduction of electric appliances in the home sometimes had unexpected results. Electric clothes washing machines, vacuum cleaners, and other appliances could make housework more efficient, but they also raised the minimum standard of household cleanliness. Women who had previously cleaned carpets once every season were now expected to keep them spotlessly clean all the time with vacuum cleaners. Ironically, the overall result of laborsaving electrical appliances was often more work for women. But even if the results were not always in their favor, women still wielded great power through their purchasing decisions.

Retrieved from "https://ethw.org/w/index.php?title=Electricity_and_the_Housewife&oldid=154712"
Categories:
This page was last edited on 12 April 2017, at 13:51.
About ETHW
Policies and disclaimers