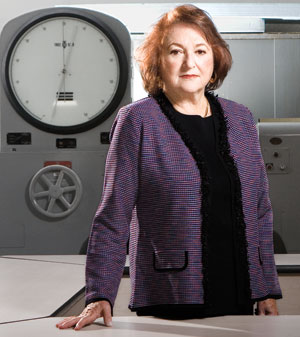 IEEE Fellow, 1990, "For achievements and leadership in engineering education and efforts to increase the number of women and minorities in the engineering profession."

Baum became an engineer out of rebellion! When she made that decision at the age of seventeen, it just was not something a woman would do. Her path to college wasn't a smooth one, she was not accepted to several engineering schools because she was a woman, and in one instance, because they did not have the right facilities (no women's bathrooms.) She was accepted by the City College of New York (CCNY) and was the only female engineering student. She earned her BEE in 1959 from CCNY, and her MEE (1961) and Ph.D. (1964) from Polytechnic Institute of New York.

She worked as an engineer at Sperry Rand Corp. and later at General Instruments Corp. However, most of her career has been spent in academia. She was the first woman Dean of Engineering at Pratt Institute in 1991. She joined Cooper Union in 1987.

Baum is a fearless advocate of issues that relate to women and minorities students in engineering. She is a perfect match for Cooper Union, which is a tuition-free institution. It has a tradition of teaching students from diverse cultural and ethnic backgrounds. Eleanor feels that Cooper Union is the most exciting academic institution she has ever encountered. She notes that its small, has a superb faculty, and has the type of students that faculty dream of teaching.

Baum is also an advocate of Life Long Learning, which the IEEE is committed to through its Educational Activities. She participated in the IEEE Technological Literacy Counts (TLC) Workshop, 9-10 October 1998, in Baltimore MD. More than 100 educators and engineers met to launch a collaborative effort to promote universal technological literacy.

Baum is a past President of the Accreditation Board of Engineering and Technology (ABET). She is a Fellow of IEEE, the Society for Women Engineers (SWE), and the Order of the Engineer as well as the recipient of a number of honorary degrees. She serves on the Boards of several prestigious organizations and has chaired the Committee for Examiners for the Graduate School Record Examination. A member of the Engineer Workforce Commission and the Competitiveness Policy Council, Eleanor has received many awards in the area of engineering education. She has also been active in national efforts to increase the number of women and minorities entering the engineering profession and is a speaker and writer on this topic.

Baum's leisure activities include cooking, traveling, reading mysteries, playing tennis and attending the theater. She and her husband Paul have two daughters, Elizabeth and Jennifer.

Retrieved from "https://ethw.org/w/index.php?title=Eleanor_Baum&oldid=155524"
Categories:
This page was last edited on 25 July 2017, at 16:48.
About ETHW
Policies and disclaimers