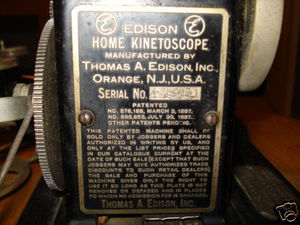 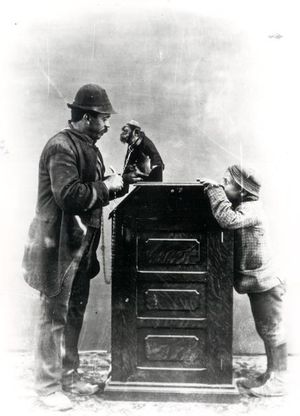 Thomas Alva Edison, who had earlier invented the phonograph, was hard at work “experimenting upon an instrument which does for the eye what the phonograph does for the ear” in the late 1880s. With his assistant William K. L. Dickson, he patented the Kinetograph, a motion picture camera that used long strips of photographic film to capture a record of a moving image.

In 1892, Edison and Dickson developed a device called the Kinetoscope to view the resulting motion picture. The first of these viewers did not project the image onto a screen, but required the viewer to "peep" into a wooden enclosure. Arcades where these movies were shown came to be known as "peep shows". Peep shows cost a nickel and became a popular form of entertainment. 1892 also saw the construction of the Black Maria, the famous production studio used to shoot Edison's films. 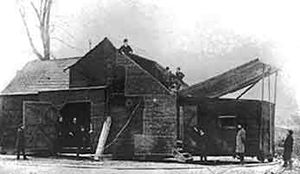 By the end of 1895 several inventors had developed projection systems that showed motion pictures on a large screen. Although Edison had believed he would make money from his Kinetoscope sales, in early 1896 he recognized the importance of theatrical presentation and he licensed the projector of Thomas Armat, which was produced under the Edison brand. He also turned his attention to producing silent motion pictures for the big screen.

Visionaries now looked for a way to add sound to movies. Inventors, such as Lèon Gaumont in France in 1901 and Carl Laemmle in Germany in 1907 tried, with limited success, to use the phonograph to provide sound for motion pictures, giving Edison some encouragement. It wasn’t until quite a while later—1913—that he introduced his Kinetophone (which means motion and sound). 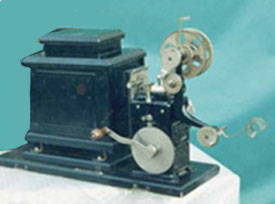 One of his new Kinetophone films was exhibited for several months at Keith’s Colonial Theater in New York in February, 1913. The system generated a lot of attention, and Edison was able to rent the systems to theaters and collect high fees of $150 to $200 per week. Soon he had about fifty machines rented out, which translated into a $10,000 per week income. The business boomed during the summer of 1913, and Edison prepared to take it overseas. He sold many of the machines in Europe and Japan, where they generated considerable excitement. However, enthusiasm in the United States began to fade as early as the autumn of 1913.

Part of the reason for the waning excitement was simply that the technology did not work very well. Because the sound portion was played on a phonograph that was separate from the projector, it was difficult to get the sound and the motion synchronized perfectly. Sometimes, when the movie was showing, sounds came too late, or too early. Audiences found this annoying. Many people also thought Edison’s films were boring. Each lasted only six minutes, and portrayed scenes from famous plays or vaudeville acts. Edison’s talking film business gradually began to lose more and more money until he finally sold it off in 1918. After that year Edison had no other interests in the movie business.

Retrieved from "https://ethw.org/w/index.php?title=Edison_and_Motion_Pictures&oldid=120013"
Categories:
This page was last edited on 14 September 2015, at 17:52.
About ETHW
Policies and disclaimers