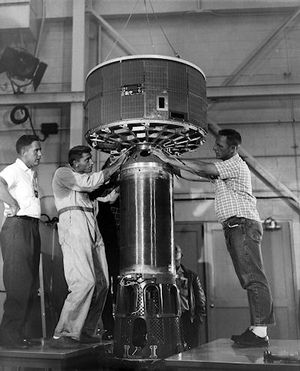 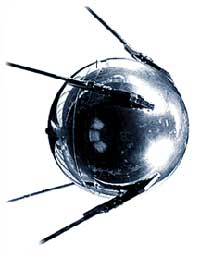 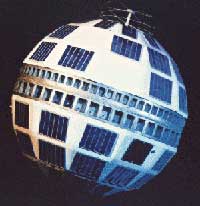 Since the early 19th century, when new knowledge of electricity led to the development of the telegraph, scientists and engineers have striven to make global communications reliable and efficient. The telegraph was followed by the telephone, introduced in 1876. It wasn’t until 80 years later, however, that the first transatlantic telephone cable linked the U.S and Europe. The rest of the world waited even longer to be linked.

The next step in the communications revolution was communications satellites, which use microwaves to operate. Microwaves were first used for communication in the early 1930s. In 1946, through their work on Project Diana, scientists discovered they could bounce microwaves off the moon. In 1959 U.S Navy engineers began using the moon’s surface to reflect microwave radio communication signals between Washington, D.C and Hawaii.

The advent of rockets in the 1950s led engineers to think seriously about putting orbiting satellites into space. Writer Arthur C. Clarke first suggested the idea of communications satellites in geosynchronous in the October 1945 issue of Wireless World. Clarke realized that a radio relay station in space could serve a huge area of the earth’s surface. Because the space relay would be so far above the surface, it would be like having a radio tower thousands of miles high. In In the April 1955 issue of Jet Propulsion, J.R. Pierce of Bell Labs presented his ideas on communications satellites in an article entitled "Orbital radio relays"; he discussed both passive satellites and ones with powered repeaters, calculating that microwave communications between points on earth should be possible by means of orbiting satellites. Pierce subsequently became a major advocate of using artificial “satellites” (objects that circle the earth) for communication purposes.

The first satellite to contain a radio transmitter was the USSR’s Sputnik, launched in 1957. The U.S rushed to end a Sputnik-like transmitter into space in early 1958. Later that same year the U.S put into orbit the first radio relay capable of both transmitting and receiving messages (called Project SCORE). The military continued to develop military satellites and, today, military command and control operations in many countries rely extensively on satellites, although the functions of many of them remain secret. These satellites have included spy satellites, those used for voice and data communication, weather information, navigational information, and the Global Positioning System (GPS).

Bell Labs and NASA launched the first satellite for civilian communication in 1960. Called Echo I, it consisted of a large plastic balloon which was inflated in space. Its surface, which was coated in a thin layer of aluminum, reflected microwave communication beams aimed at it. In 1962 Echo I was used to reflect microwave signals carrying images and telephone conversations. Satellites also went international in 1962, as the United Kingdom and Canada both sponsored launches that year.

Beginning in 1961, NASA sponsored more advanced “active” telecommunication satellites containing electronic relays. The idea was to launch numerous satellites into orbit and build corresponding ground stations wherever they were needed. Telephone, television, facsimile, and data could then be efficiently transmitted anywhere at low cost. The first to be launched was AT&T’s Telstar I on 10 July 1962. Telstar I retransmitted TV signals from the U.S to a receiving station in France that same day. It was also the first satellite to use an important new type of microwave transmitting device called the traveling wave tube. This device became a common feature in later satellites.

Satellites like Telstar I marked a new age, but had many limitations. Non-geosynchronous satellites (those that did not move with the earth) such as Telstar I passed across the sky and then disappeared over the horizon. For a reliable satellite telecommunication system based on a non-geosynchronous satellite to work, either numerous ground stations needed to be strung across a vast distance on the earth, or a string of satellites were required. Otherwise contact with the satellite would be lost as soon as it dipped below the horizon. Telstar I, for example, was available for use by the stations in the U.S and Europe only about 100 minutes per day.

In 1965 a new type of satellite called Early Bird I was launched. This was the first geosynchronous satellite, meaning that the satellite’s orbital speed matched the movement of the earth, making it appear stationary in the sky. Because it never dipped below the horizon, Early Bird I could provide 150 simultaneous telephone links or one television link. Geosynchronous satellites also simplified the problem of space-to-ground communication, and most of today’s satellites operate this way. By 1969 global satellite coverage was achieved just days before the first moon landing, which made worldwide live television broadcast of the event possible.

New uses for satellites emerged in 1970s, such as their use as a navigational aid for commercial ships. Another new use was the so-called domestic satellite, which enhanced or even bypassed, existing land-based national networks rather than providing international links across the oceans. Canada was the first nation to use domestic satellites to serve vast rural areas poorly served by the telephone system. In subsequent years, many other countries purchased or leased satellites to avoid the high expense of building ground-based telephone, radio, or television networks. Indonesia was the first to do this in 1976.

In the U.S, domestic satellites were mainly used by television broadcasters. In the late 1970s and 1980s, new “satellite” networks such as Home Box Office and Turner Network Television emerged, using satellites to create at a low cost the kind of expensive land-based networks built earlier by NBC, ABC, and CBS. Ground stations operated by local cable companies receive these signals and retransmit them over coaxial cable to homes. Since the 1980s, many American consumers have turned to new satellites broadcasting services, which transmit directly to receiving “dish” antennas small enough to be mounted outside the home. This is possible because transmitters inside the satellites are much more powerful, and thus a smaller, less sensitive antenna can be used.

Recognition of the Importance of Satellites

The Emmy Awards are given by the Academy to honor achievements on television in a range of categories such as acting, writing, and directing. However, the Academy also gives awards for engineering achievements, present and past. Having heard about the Telstar anniversary celebrations in 2002, the Engineering Committee of the Academy decided to recognize Telstar as well. With difficulty finding a corporate partner to prepare the application, the committee turned to the IEEE History Center, which came through with a proposal that was eventually endorsed by the broader Academy.

The Telstar achievement was honored by IEEE at the sites of the original three earth stations of the Telstar communications system. The citation at the main station at Andover, Maine, USA, reads:

In 1932 the word “Oersted” Øersted was adopted for the SI physical unit of magnetic field strength and in 1993 to the first Danish communications satellite.

Retrieved from "https://ethw.org/w/index.php?title=Communications_Satellites&oldid=184973"
Category:
This page was last edited on 12 May 2021, at 19:45.
About ETHW
Policies and disclaimers