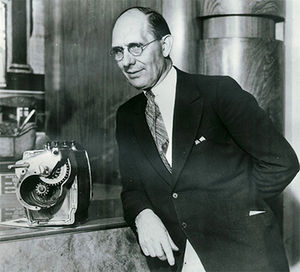 This article was initially published in Today's Engineer on August 2013

Charles Kettering was one of the most distinguished (and wealthiest) engineers of the twentieth century, serving for decades as the director of General Motors’ research division. He came from a humble beginning on a farm forty miles outside Columbus, Ohio, and got his start with a B.S. in Electrical Engineering from the Ohio State University in 1904. And it was as an electrical engineer that he first earned his reputation and his fortune, before moving on to a distinguished career in research management and a broader interest in automotive engineering as a whole.

Kettering’s path to his degree was anything but smooth. He was born in 1876 and raised on his family’s farm forty miles northeast of Columbus, Ohio. After high school he worked as a school teacher, entered Ohio State as an EE major, left after a year due to eye problems, and then worked two years on a telephone line crew before returning to Ohio State to complete his degree. His excellent college record helped land him a job with the National Cash Register Company in Dayton, Ohio with the position of NCR’s “electrical inventor.” National’s line of cash registers at that time were mechanical devices, hand operated by a clerk turning a large crank. Kettering was hired to revitalize the largely stagnant product line through innovation. He soon invented the first system that enabled a central department store office to quickly approve credit sales made by clerks on the store floor, by coupling existing telephones at the sales counters to solenoid operated stamping machines by which the central office could quickly approve the sale after checking the customer’s records. This increased NCR’s sales to department stores, many of which had previously resisted cash registers. It also earned Kettering a promotion to head of a nine-person inventions department.

In early 1905, Kettering turned his attention to designing an electrically powered cash register. Within a few months he had succeeded. He had a key insight—that the motor needed to operate only in short intense bursts, and not continuously. This enabled him to design and use a motor small enough to fit into a standard cash register. Building on this motor, he designed a system with a series of incremental refinements, including an overrunning clutch, a magnetic relay, a universal AC motor, and improved windings. NCR introduced its first electric cash register to great success in 1906, and soon had a line of electric cash registers to meet the requirements of various retailers.

Kettering’s next project for NCR was the design of a more complex electrical cash register system to meet the need of restaurants. This successful system combined a printer that produced a duplicate stub, an ability to divide the total into subcategories such as food, beverages, and cigars, and the ability to subtract as well as add. NCR introduced it commercially in 1908.

But like many young men of the early twentieth century, Kettering became interested in a newer and more rapidly evolving technology, the automobile, and looked in his spare time for ways to improve it. And as an electrical engineer, he turned his attention to the one electrical subsystem present in the gasoline-powered car of the time—the ignition system. American cars of the time used non-rechargeable dry cells to provide the electricity that sent a shower of sparks into the combustion cylinder to ignite the air/fuel mixture. The batteries had to be replaced every few hundred miles. Kettering adapted the magnetic relay from his cash register into a device that would produce one spark from a spark plug instead of a shower, decreasing the drain on the battery and increasing its life. Kettering and a handful of associates, including NCR's general manager Col. Edward A. Deeds, formed the Dayton Engineering Laboratories Company (Delco) to commercialize the invention. In July 1909, Cadillac purchased 8,000 units. Delco was on its way, and Kettering soon left NCR to devote his full attention to Delco and automotive electrical systems. 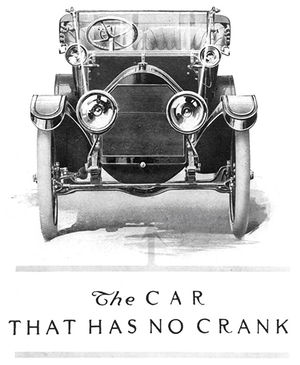 Advertisement for the 1912 Cadillac, the first car with a self-starter

Kettering next turned his attention, as did many others, to what seemed clearly one of the major weaknesses of the gasoline-powered automobile—the hand crank that had to be inserted in the front of the car and manually rotated with considerable force to start the car. Not only was this a nuisance that kept some, especially women, from operating cars, it also was dangerous—there were many reported incidents of the crank kicking back, leading to broken arms, broken jaws, and worse. From the first, Kettering envisioned not just an electric self-starter, but an integrated electrical system for starting, ignition and lighting. He conceived of a system that would use a single motor for starting the car and for operating the ignition system and the lighting system. He and his team developed a motor which could operate at a 1:1 ratio with the engine when the car was running, but could be geared up for more torque during starting. Like with his cash register, the motor could produce a substantial burst of power for a brief period of time. He switched from dry cells to a storage battery, with the electric motor serving as a generator to recharge the battery when the car was running. He also devised a voltage regulator to maintain the generator’s output at a reasonable voltage for charging, regardless of the variable speed of the engine. Finally, he developed a series-multiple battery arrangement that could be switched to provide the 6 volts required for the headlamps then in use, and the higher voltage required for starting. In 1911, Kettering installed the system in a Cadillac, which he successfully demonstrated to that company, which in turn committed to the self-starter, ordering 12,000 systems in November. Cadillac introduced the self-starter in its 1912 model.

Over the next few years, automobile manufacturers across the industry adopted the innovation; even Henry Ford began offering it on his best-selling Model-T in 1919. Kettering biographer Stuart W. Leslie argued that the improved battery ignition and the self-starter assured that the gasoline-powered automobile would be the dominant form of personal transportation in the United States. The sales of electric-powered cars, never more than a niche, peaked with a 1 percent market share in 1913, and were largely gone from the market by the early 1920s.

Delco grew rapidly into a large manufacturing company with 2000 employees by 1915. Delco became part of the United Motor Company in 1916, which in turn became part of General Motors in 1918. Kettering, who received a mix of cash and stock for his company, in turn became a very wealthy man, the head of General Motor’s research division, a vice president of GM, and a member of GM’s board.

While this was happening, Kettering found the time, starting in 1913, to develop, and, in 1916, to commercialize, a portable electrical generating and lighting system for use in rural America. It used a one cylinder gasoline engine. This system, marketed under the name Delco-Light, found a ready market in affluent American farmers, since the electrical grid reached very few rural communities. In 1918, the company Kettering formed to exploit the Delco-Light sold 60,000 units. The labs were incorporated as General Motors Research Corporation in 1920, at which time Kettering, simultaneously named a GM vice-president and board member, agreed to move the bulk of research activity to Detroit. In 1925, when the labs were transferred to a new 11-story building, Kettering and his family moved to Detroit, occupying a suite atop the Motor City's tallest hotel until Kettering's retirement. Sales declined during the mid-1920s as the electric grid spread to rural America, beginning with the more affluent sections.

Kettering, even after becoming a GM executive, kept his hand in a variety of research projects, though most of these were more general engineering than electrical engineering. Among the more notable were the interrelated problems of better quality gasoline and more powerful and fuel-efficient, high-compression engines, improved automotive paints, and for General Motors’ Frigidaire division, Freon, the first non-flammable non-toxic coolant for refrigeration.

Kettering retired from GM in 1947 after a long and successful career. He received many honors and awards including, in 1958, the Edison medal from the AIEE. He devoted much time in later life to philanthropy, most notably through the establishment, together with long time GM President Alfred Sloan, of the Sloan-Kettering Institute for Cancer Research. Kettering died on 25 November 1958 at his home in Dayton at the age of 82 .

Retrieved from "https://ethw.org/w/index.php?title=Charles_F._Kettering&oldid=174672"
Categories:
This page was last edited on 1 April 2019, at 19:26.
About ETHW
Policies and disclaimers