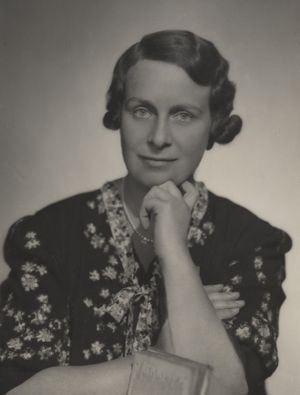 Caroline Haslett was born in Worth, Sussex, England, on August 17th, 1895. Acquiring engineering training from Cochran Boiler Company during the World War I, Haslett became the first secretary of the Women's Engineering Society (WES) in 1919. She was the first editor of the magazine The Woman Engineer, and in 1924 she co-founded the Electrical Association for Women, becoming its first director, a position she served until 1956.

In 1932, Haslett was elected to Companion of the IEE (now IET), the first woman to do so. For much of her career, Haslett was the only woman in her professional sphere, including delegates to the 1930 World Power Conference in Berlin, the IEE standardization committee on electrical installations in post-war Britain, and chaired the Board of Trade's Hosiery Industry Working Party from 1945 to 1946, the first woman to chair a UK government working party.

Retrieved from "https://ethw.org/w/index.php?title=Caroline_Haslett&oldid=155162"
Categories:
This page was last edited on 23 May 2017, at 16:52.
About ETHW
Policies and disclaimers